The Pitts Undergraduate Award is for a Junior or Senior Chemistry Major at UCI with demonstrated academic achievement. The award amount is $1,000. Applicants must submit (1) a personal statement of no more than two pages describing their background, future career goals and how this award will help achieve those goals; and (2) the names of at least two but no more than three faculty members who can be contacted for a recommendation (letters are not required nor should they be included in the application). If the student is a transfer student from a community college, one of the faculty members may be at their previous community college.

If you have any questions, please email us at chemistry@uci.edu 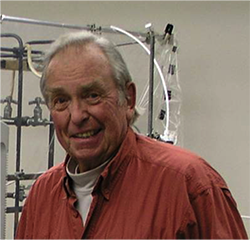 James N. Pitts Jr. was a UCLA undergraduate (B.S., 1945) as well as graduate student (Ph.D., 1949).  His undergraduate studies were interrupted so that he could serve as part of a civilian chemical corps for the National Defense Research Committee which was working on the development of gas masks to protect Allied troops in the field.  He was on the faculty at Northwestern University from 1949-1954, and then returned to California to become  a founding faculty member of the new University of California campus at Riverside (UCR).  Professor Pitts was a co-founder and then Director (1970 - 1988) of the Statewide Air Pollution Research Center (located at UCR).  He carried out seminal studies on the causes, chemistry and impacts of air pollution resulting in 380 scientific publications and four books.  He won a number of scientific awards and was widely recognized as an independent source of scientific advice, with visits by scientists from all around the world as well as politicians of all persuasions including former President Ronald Reagan, former South Dakota Senator George McGovern, former Senator and Governor of Maine Ed Muskie and California Governor Jerry Brown.  The research carried out by his team provided much of the scientific basis of California's forward-looking policies and regulations which have been widely adopted both nationally and internationally.

In 1994 he was warmly welcomed at the University of California Irvine (UCI) as a researcher when his wife, Barbara Finlayson-Pitts whom he married in 1976, moved to UCI as Professor of Chemistry.  At UCI he played a central role in mentoring at all levels, and particularly enjoyed interactions with undergraduate and graduate students.  An undergraduate scholarship he was awarded at UCLA was very helpful and it was his desire to provide similar support to undergraduates pursing degrees in chemistry at UCI. His scientific perception, vision and enthusiasm inspired a number of generations of young scientists who will carry on his legacy, and it is hoped that this award will contribute to that vision.