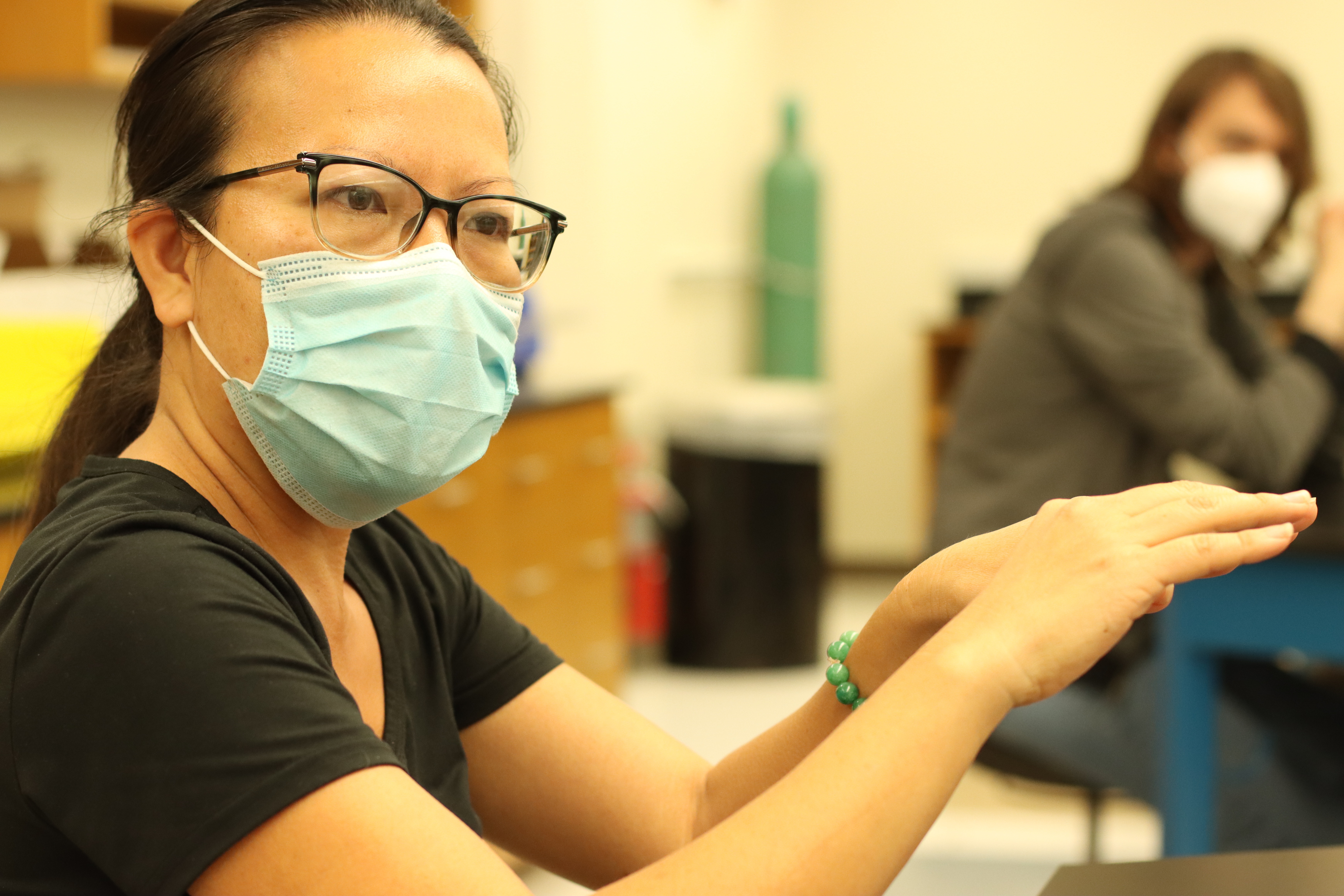 Nguyen meeting with her team of undergraduate Learning Assistants, helping them iron out wrinkles in the lab they help run.

Recently, in her office with the green wall that she painted herself, in Rowland Hall 230, Melanie “Mel” Nguyen was just finishing a meeting with a graduate student. A plaque outside Nguyen’s office door reads “Stockroom Manager'' on it, and a list from a letter of recommendation written by her close colleague, Professor of Teaching Kim Edwards, on Nguyen’s behalf enumerates her responsibilities: she maintains lab equipment, she makes solutions for chemistry labs, and she orders chemicals.

For instance, in her office Nguyen was handling a meeting with one hand, and putting out a “fire” with the other. The fire was one involving rubber gloves and a swindler. Nguyen, who graduated from UCI in 2005 with a B.S. in chemistry, knows that without the right kinds of rubber gloves — the kind you see in boxes on lab benches in chemistry labs — that the hands that do the science in UCI’s chemistry labs are not as safe as they should be from caustic chemicals. The vendor who sold her a batch of gloves sent her gloves that are less safe than the ones she actually ordered. The vendor told her that even though the packaging the gloves came in says that the gloves are the less safe kind, the gloves within are, in fact, the safe kind. “He has nothing to prove it,” Nguyen said, who would, two hours from then, be meeting with the vendor to argue her point.

Nguyen’s work is all around you in Rowland if you know where to look, or if you’re there at the right time.  Under Nguyen’s oversight, the chemistry stockroom unit provides logistical support to approximately 8,000 undergraduate students annually.  At a meeting with undergraduate learning assistants helping teach an introductory chemistry class, Nguyen helped adjust an experiment involving lasers so it’d be just right for the lab students who would soon have to perform the experiment. And the lab she was in — the physical lab space itself — was her doing as well; alongside teaching professors like Kim Edwards and Renée Link, Nguyen helped to completely redesign her department’s teaching labs so they’re easier for students to learn in and use, everything from choosing hexagon-shaped tables meant to promote student collaboration to an Apple Genius Bar-inspired lab bench at the front of the class where students can go to get one-on-one help from their TA. Nguyen, who was a student herself in these very same labs, has unique insights into how well designed lab spaces can encourage student learning.

At home Nguyen has kids and she has pets. Her kids, Ethan and Josie, are 15 and 13 years old. For pets she has three ducks and two dogs. Somehow this gang of ducks and dogs and kids all live in relative harmony, and it’s a harmony that also extends into the Department of Chemistry, where under Nguyen’s watchful eye for almost 20 years, every hand is safe while the proverbial fires are put out before anyone notices.

“Mel continues to make UCI a better place,” wrote Edwards in her letter. “She’s an irreplaceable, highly valued member of our team in Chemistry.”